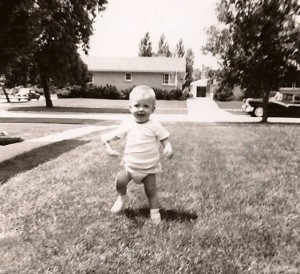 The two men who were speaking are tech journalists. This interchange began with a discussion concerning a Facebook app known as “Timeline“, a new way to organize your Facebook profile that depicts your Facebook activities organized as an event stream. For people who link pretty much everything they do to Facebook, who essentially make Facebook their home, the thing they stay hooked into all the time, and to which they report for all their social connections, Timeline provides a good deal of appeal. It’s their on-line biography. It’s their vanity site.

One of the journalists, the respondent, plays with the full palette of social networking tools. He figures he’s a public guy anyway. He should not just be familiar with the stuff he discusses in his articles and podcasts, he should live it.

The other, the one who asked the question,  is a curmudgeon, someone who wishes to keep his personal life personal and deal with tech from the point of view of an observer.

The question he asked, “Why would anyone want to do that” goes beyond simply posting a baby photo; after all, you can set your privacy levels with some granularity. It also goes beyond the large issue of the data mining, cloud storage of personal information, letting The Man have access to your privates, as it were.

At least for the purposes of this post the question goes beyond those things.

The question really spears its way into one beating heart:  Who The Fuck Do You Think Cares About Your Baby Pictures?

I had a discussion with my step-mother about Facebook recently. “I don’t really get Facebook. I use it because my daughter is on there and that’s how I find out what she’s doing, and a few of my friends use it a lot, but it seems to me that most of it is just so … inane! People post the silliest stuff!”

She’s right. We do.  Because Facebook is our stage and we, many of us, have convinced ourselves that someone out there really does care about what we’re cooking for dinner, how cute our kittehs are, and the cherub-quotient of our diaper-clad images.

Think back to your childhood. Didn’t Mom and Dad have books filled with photos, and stacks of boxes with carousels filled with slides of the family vacations?  Your art projects in a glass case in the living room? And when guests came over, were not more than a few of them subjugated to stories of the family’s doings, illustrated with said slides and photo albums and art projects?

Facebook is becoming everyone’s living room.  Our Facebook contacts are our invited guests.  So, irrespective of how many people actually want to see our baby pictures or hear our dinner plans, we share them. Because publishing our private matters makes us feel connected.

And not a few of us want to see those pictures and read about those menus. Because, as I say, it makes us feel connected.